Actor and dog lover Sir Patrick Stewart is lending his support to a Care2 petition demanding DEFRA Secretary of State Michael Gove repeal breed specific legislation (BSL) in the UK under the Dangerous Dogs Act of 1991.

Under current law, the Dangerous Dogs Act prohibits the ownership of certain types of dogs – in particular, the pit bull terrier type.

What many people are unaware of is that ‘type’ means purely the physical dimensions of the dog. So you can in fact get two dogs, from the same litter – they could even be Kennel Club registered, but if one sibling grew to match the physical description of ‘pit bull type’ then, by law, that dog could be seized and potentially destroyed.

Under the Act, sometimes dogs can be placed on an exemption order, with special permission given from a court, but dogs who have been classed as type may not be owned, bought, sold, or even rehomed from rescue centres.

The regulation is outdated. It was brought in with the public being told it was intended to improve public safety, but animal rights groups say it is unnecessary and ineffective, arguing that a dog’s behaviour is not driven by its breed, but by how it is raised and treated.

On his decision to join the campaign Sir Patrick Stewart said, “It is essential that The Dangerous Dogs Act of 1991 be re-examined.

“Caring, good-natured creatures are being denied homes and their owners and potential owners deprived of a healthy and loving partnership.” 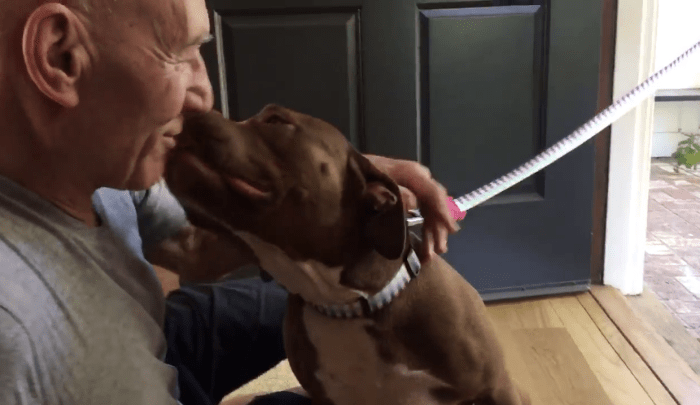 Sir Patrick Stewart and Ginger, pictured when they first met

“Caring, good-natured creatures are being denied homes and their owners and potential owners deprived of a healthy and loving partnership.”

Earlier this year, Stewart announced to his fans that a foster dog named Ginger, who had been taken in to live with him and his wife Sunny Ozell in their Los Angeles home, would not be adopted by the couple, because the UK – where the family lives for part of the year – does not allow pit bulls under the Dangerous Dogs Act.

Care2 has been fighting breed-specific legislation for a long time and has successfully fought the introduction of similar ordinances in the United States.

Care2 CEO and Founder Randy Paynter said, “There is no evidence that certain breeds are naturally more aggressive than others. Better policy would be to crack down on dog fighting and to institute a public awareness campaign on how to raise happy, gentle dogs. We are honored that Sir Patrick Stewart is joining Care2 in the fight for a kinder world.”

Add your voice to the campaign to fight BSL in the UK by signing the petition here: www.care2.com/EndBSL