Nineteen heroic Police Dogs who supported emergency services during the London terror attacks at Westminster Bridge, London Bridge and Borough Market were honoured today for their service and received the PDSA Order of Merit– the animal equivalent of the OBE.

Seven of the dogs, Metropolitan Police Dogs Kai, Delta and Dave joined British Transport Police Dogs Bruno, Marci, Jax and Bobby were selected to represent the Metropolitan Police (Met) and British Transport Police (BTP) animals who served during the 2017 attacks at Westminster Bridge on Wednesday 22 March 2017 and at London Bridge and Borough Market on Saturday 3 June 2017. 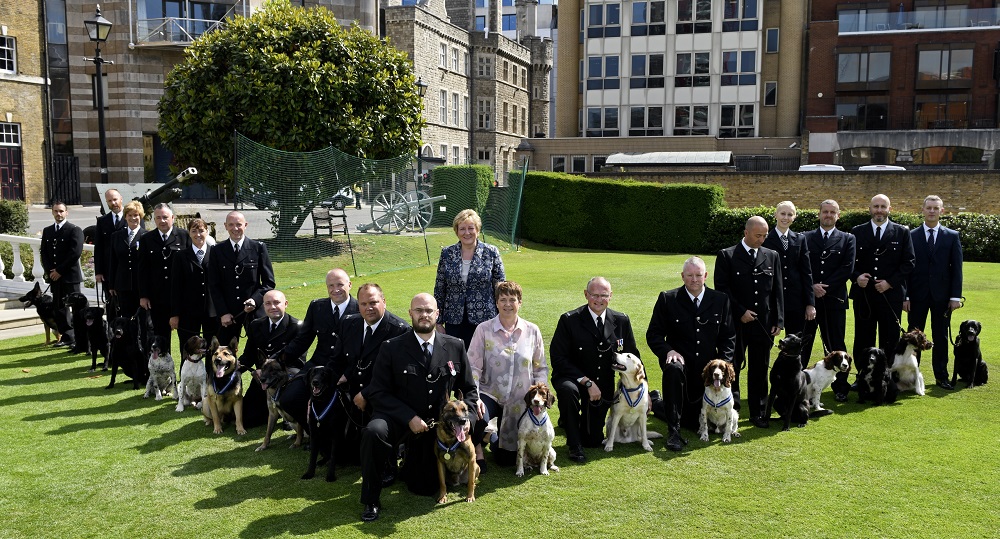 In March 2017, Central London was hit by a terrorist attack that, in just 82 seconds, left five people dead, including a police officer, and 29 injured.

In the moments following the attack, the BTP Explosive Search Dog Section and the Met Police Explosive Detection Dog Team were rushed to the scene to assess the situation and ensure public safety.

BTP Dogs Ollie, Oscar, Bruno and Scooby searched through the chaos for potential devices that could cause further harm on the bridge itself and around Parliament Square.

They were joined at the scene by Met Police Dogs Kai (pictured below) and Bruce and their handlers. They searched the car that had crashed into the wall of the Palace of Westminster, as a precautionary measure in case it contained a bomb. Once safe, Helicopter Emergency Medical Services landed in Parliament Square to help injured victims. 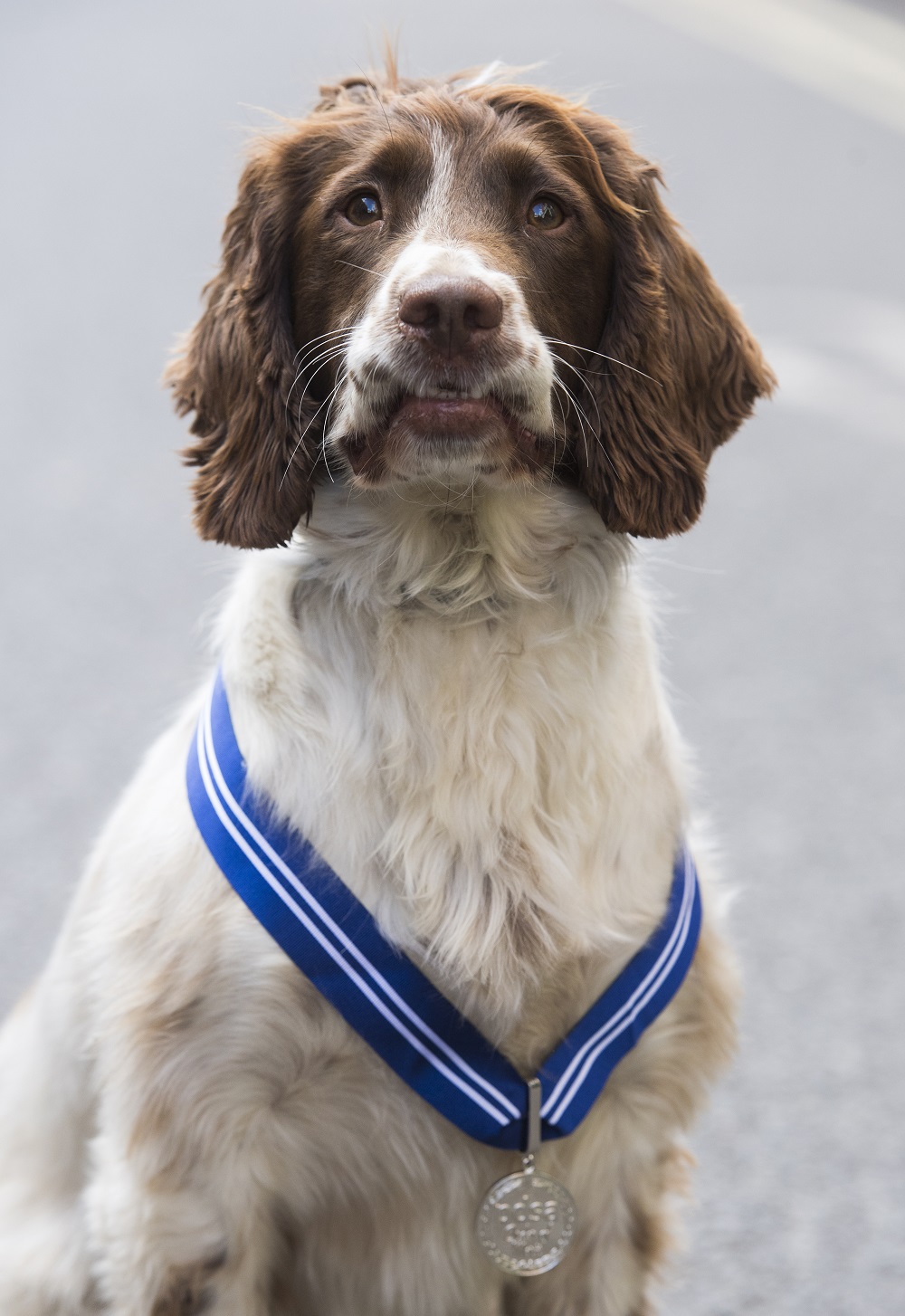 Police protocol states that if an object or area has been declared suspicious, all emergency services must withdraw until the scene is confirmed safe. The dogs and handlers put themselves directly in harm’s way to secure the scene, ensure the safety of the public and allow life-saving treatment of the casualties.

In June 2017, a white van containing three attackers drove into ten pedestrians on London Bridge, seriously injuring eight and killing two. The van collided with the railings alongside Barrow Boy and Banker Public House. The attackers alighted from the van armed with knives and appeared to be wearing suicide vests. They ran through Borough Market, continuing their assaults on innocent members of the public. In total, eight people were killed and 48 people were injured during the attack.

BTP General Purpose Dog Teams were called to the scene alongside Firearms Officers to clear the streets, buildings and public areas. Police Dogs Jax, Marci, Johnny, Rocy, Tara and Bobby searched amid a volatile situation for over 13 hours. They worked tirelessly, never faltering in their duty.

Met Police Dogs Alfie, Dave, Poppy and Robson were also deployed to undertake a systematic search of the area. Together with Police Dog Kai (who had only qualified in November 2016 and was relatively inexperienced), they searched a dozen buildings.

Police Dog Delta (pictured below) worked with her handler and a team of Firearms Officers to search over 30 buildings. Her skills, calibre and professionalism saved vital time. 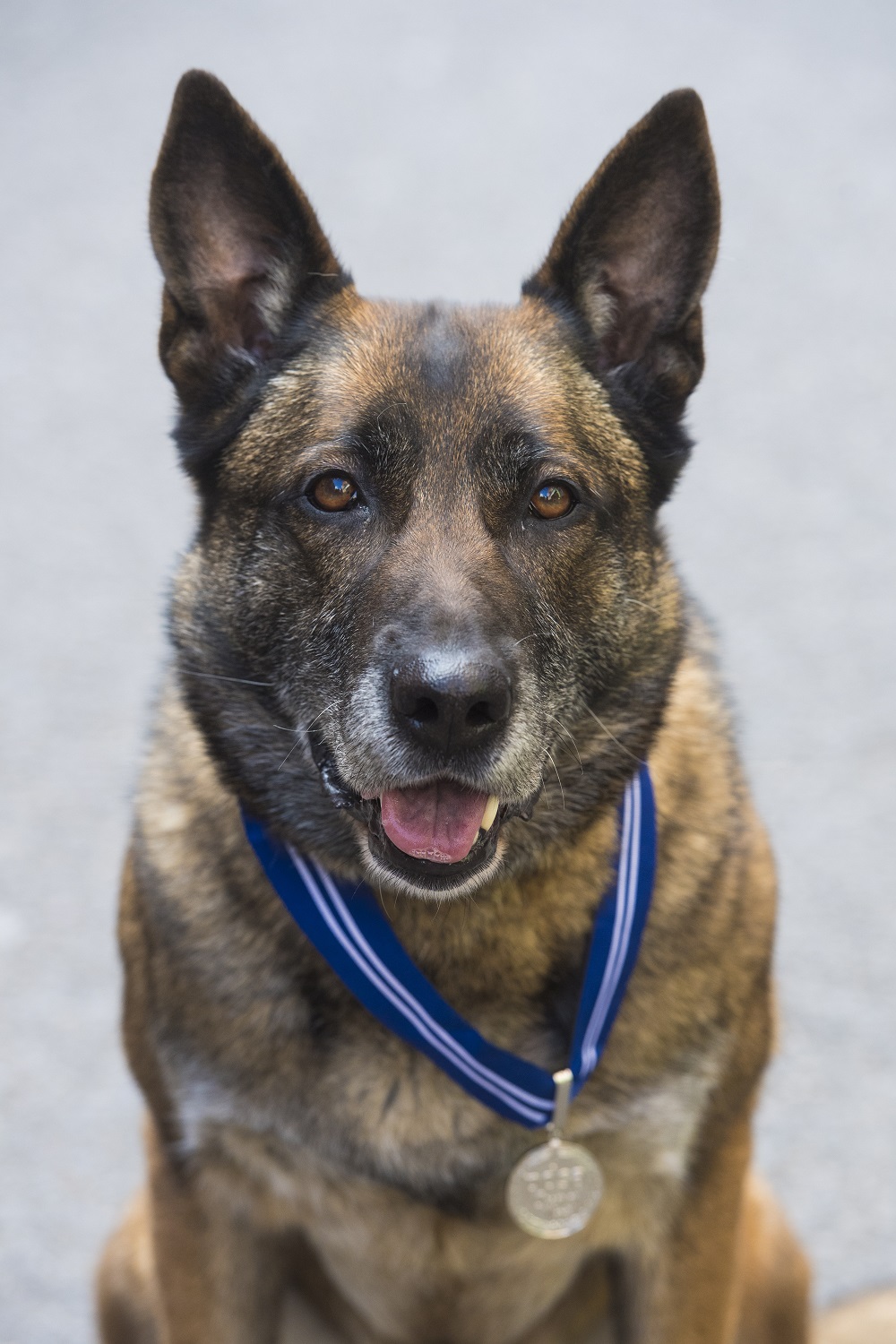 At Borough Market, the Met Dog Teams joined Armed Officers to search for a suspect who was still unaccounted for, despite the unknown risk level to themselves and their dogs.

Meanwhile, Police Dogs Casper and Romeo were tasked with searching the suspects’ suicide vests for explosives.

Police Dog Casper and his handler were later dispatched to clear a suspect vehicle under a nearby railway bridge that, it was believed, could be harbouring an explosive device. Despite the horrendous surrounding conditions, Casper was able to indicate the vehicle was safe, allowing a visual check inside the vehicle to take place.

Throughout the incident, the teams worked with the knowledge that potential further danger remained all around them, but put the safety of the public ahead of their own as they tirelessly continued their work.

Commenting on the award given to the 19 heroic dogs, British Transport Police Inspector Paul Miles said:

“I am immensely proud of our dogs and their handlers, and absolutely thrilled to see their bravery and resilience recognised through this very special award. It is impossible to overstate the courage and dedication show by our dog teams, and all of their colleagues who responded to the tragic events of 2017. They worked through physically and emotionally challenging conditions without (a) second thought, willingly walking into danger and putting the public’s safety before their own. While today is a day of celebration, the horror of these incidents will never leave us and our thoughts will always remain with those who lost their lives and were injured.”

Chief Inspector Graham Horwood from the Met’s Taskforce added: “It is a huge honour for our heroic police dogs to be awarded with such a prestigious medal.

“Our Police Dogs and their handlers work day and night, in some of the most challenging environments, to help keep London safe and we are immensely proud that their exceptional work has been recognised.

“Our thoughts and condolences remain with those affected by the awful events that took place in 2017.”