Three heroic and devoted Scottish dogs have been given honours by the UK’s leading veterinary charity for their bravery and devotion to duty.

At a special ceremony at the Scottish Parliament, Police Dog Ozzy became the latest recipient of the prestigious PDSA Gold Medal* – the animals’ equivalent of the George Cross – for disarming a man threatening to blow up a block of flats.

Police Dog Sweep and civilian dog Sabby were awarded the PDSA Order of Merit* – the animals’ OBE. PD Sweep’s award is in recognition of outstanding service as a detection dog, uncovering drugs, weapons, cash and poisons over an eight-year career. Sabby was honoured for her role within the NHS, supporting people with learning difficulties.

Commenting on the awards, PDSA Director General Jan McLoughlin said: “Between them, these three wonderful dogs have demonstrated extraordinary dedication, courage and character. They have excelled in different ways but each story demonstrates the huge contribution that animals make to our lives.”

Police Dog Ozzy received the PDSA Gold Medal for his bravery and life-saving actions disarming an armed assailant threatening to blow up a block of flats.

Before his retirement, nine-year-old PD Ozzy worked for Police Scotland. In 2015, Ozzy and his handler Police Constable Brian Tennant, were called to an incident at a flat in Falkirk, where a man had assaulted two people at knifepoint. On arrival they discovered the man had severed a gas pipe and was threatening to blow up the building.

The occupants of the flats were evacuated, leaving PC Tennant and PD Ozzy able to enter the building. The armed assailant charged at them shouting threats, while attempting to ignite the gas with a lighter.

After warning the assailant PC Tennant released Ozzy, who tackled the man to the ground where he was disarmed and arrested.

PD Ozzy’s intervention prevented the man from harming himself and potentially others as well as causing extensive damage to the building. 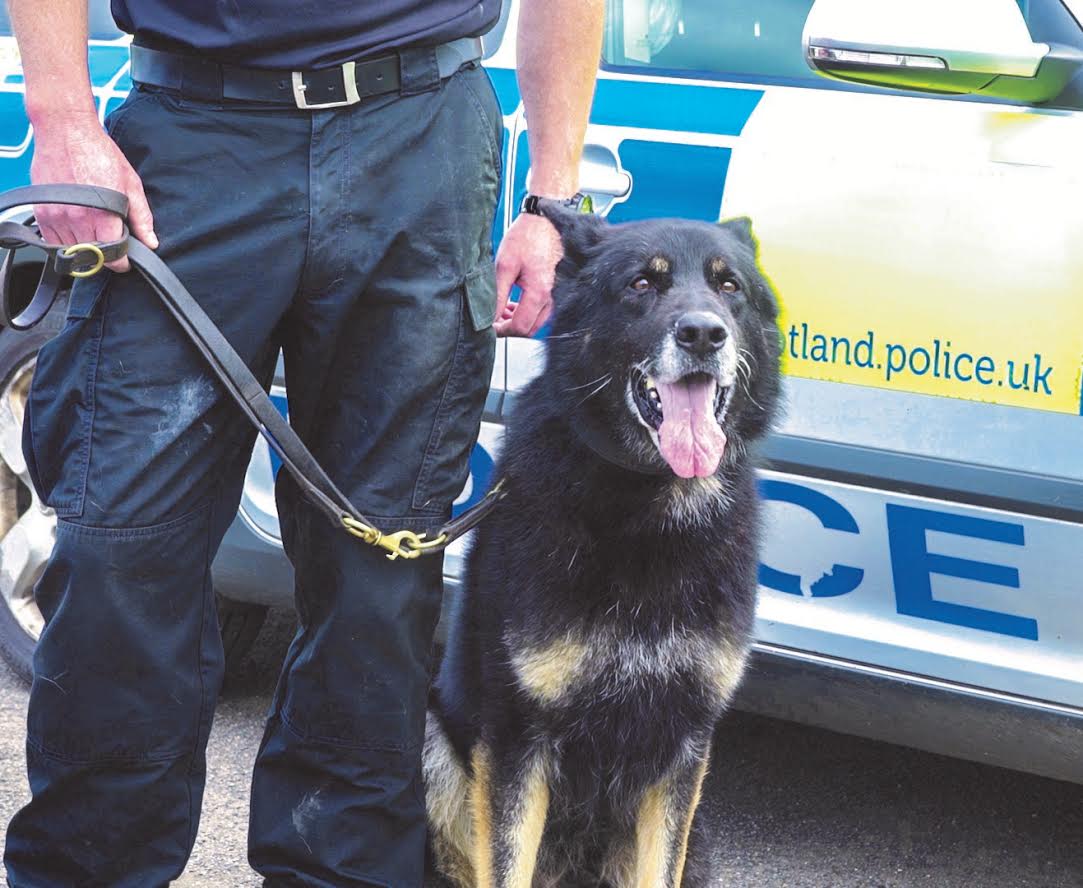 Commenting on the award, PC Brian Tennant said: “Ozzy has been a loyal and exemplary police dog throughout his career. He has assisted with apprehending numerous criminals, saved lives and prevented countless injuries to members of the public and fellow police officers. Receiving the PDSA Gold Medal is a fitting end to his distinguished career, I am incredibly proud of him.”

Police Dog Sweep, a Working Cocker Spaniel, received his PDSA Order of Merit for outstanding devotion to duty while working as Detection Dog for Lothian and Borders Police and Police Scotland.

During a career spanning 2007 to 2015, 11-year-old PD Sweep was trained to detect drugs, firearms, cash and poison and worked alongside Police Constable Rhona Meikle.

In 2012, PD Sweep became the UK’s only Poison Detection Dog, after being trained to find Carbofuran, a deadly banned poison used to target birds of prey. He remained in this exclusive role until his retirement in 2015.

During his service PD Sweep completed around 100 successful searches, removing dangerous weapons, drugs and poisons from the streets of Scotland. He successfully located £512,000 worth of street drugs, £250,000 in cash, six shotguns, three handguns, a flare gun, two rifles, 3,500 shotgun cartridges and 1,000 rounds of ammunition.

PD Sweep’s unique skills and devotion to duty have undeniably made Scotland safer for civilians and wildlife.

Commenting on the award, PC Rhona Meikle said: “Sweep has made a huge contribution to the fight against violent and organised crime in Scotland. He has also helped protect Scottish wildlife through his poisons detection work. I’m so pleased he has been awarded the PDSA Order of Merit. I’ve always known he’s special and now so does everyone else!” 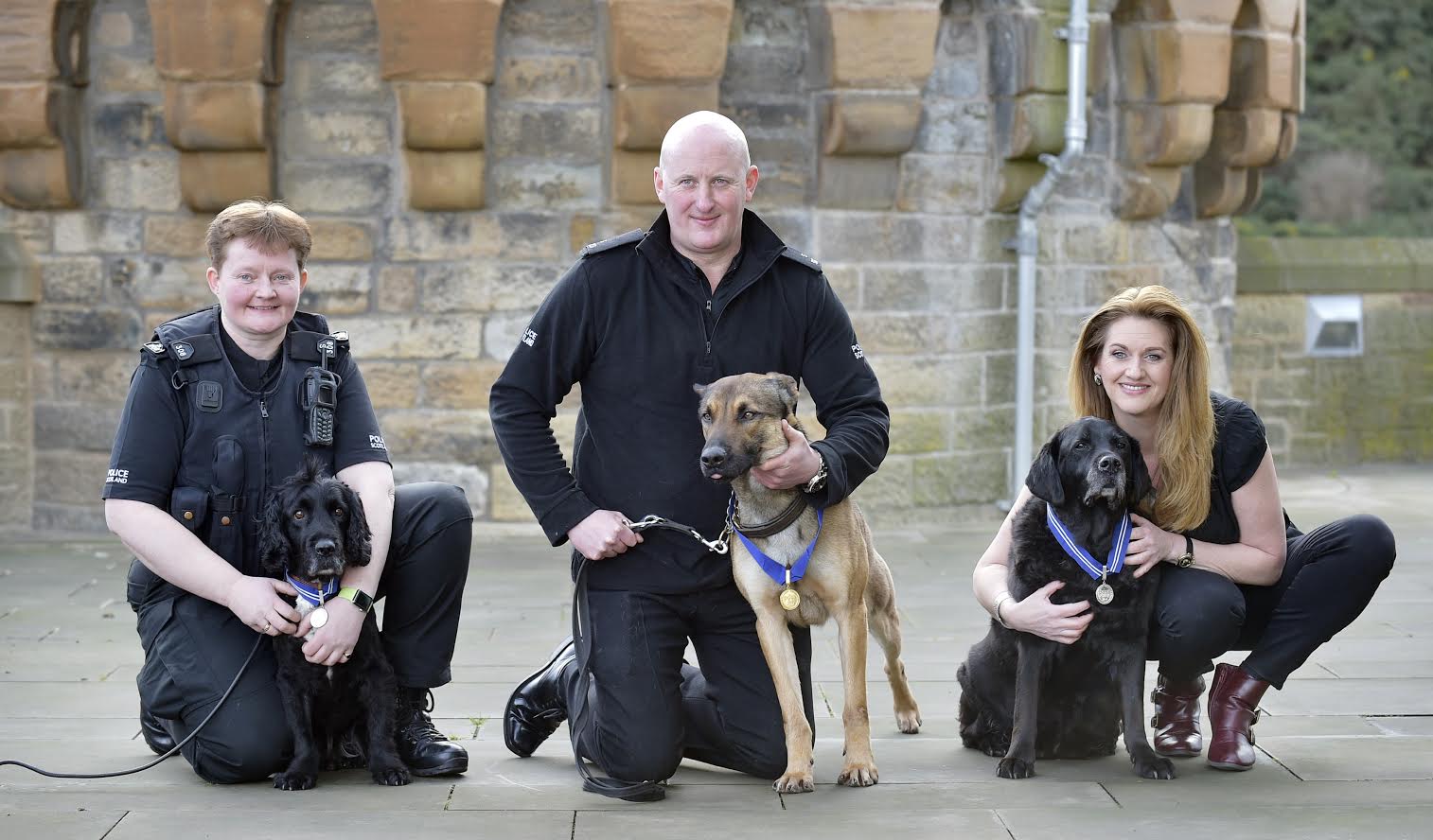 Thirteen-year-old Labrador Sabby (Sabakka) was awarded the PDSA Order of Merit in recognition of her role supporting people with learning difficulties.

Sabby retired in 2016 after a distinguished ten-year career working with the NHS Lanarkshire Learning Disability Occupational Therapy Service team. During that time she worked alongside Jacqueline Evans, an Occupational Therapy Assistant Practitioner, helping people with learning disabilities both in the community and the hospital.

Her warm and gentle nature helped her develop a special relationship with patients, allowing them to develop skills, make decisions and learn responsibilities. Opportunities that without Sabby’s involvement would have been unavailable to them.

Sabby has also worked alongside clinical psychologists supporting patients who suffer from extreme dog phobias. Her involvement has been recognised as a key factor in enabling these patients to become further integrated into their community.

Sabby’s work with the NHS Lanarkshire is an excellent example of the special relationship between human and animals.

Jacqueline Evans said: “After many years of devoted service, it is wonderful that Sabby’s skills and commitment to our patients have been recognised by PDSA. She is now enjoying her well-earned retirement and is greatly missed by all the patients and staff she has selflessly helped over the years.”

The PDSA Gold Medal and Order of Merits were presented to PD Ozzy, PD Sweep and Sabby by PDSA Director General Jan McLoughlin.

Jan said: “I feel incredibly proud to award Ozzy, Sweep and Sabby, three truly amazing dogs with their PDSA Medals. Each of their stories is unique and special, but they have all made a profoundly positive impact on the lives of people in Scotland.

“Today they join a very honourable line-up and are all worthy recipients of the PDSA Gold Medal and PDSA Order of Merit.”

Police Scotland, Assistant Chief Constable Bernard Higgin, added: “Police dogs play an essential role in supporting our officers in Keeping People Safe, as these awards demonstrate. Our dogs and their handlers perform many roles, whether it be searching for missing persons, searching out illegal drugs, money, poison or explosives. It is clear that they are brave and fearless teams and the awards to Ozzy and Sweep amply demonstrate that.”

Instituted in 2002, the PDSA Gold Medal rewards acts of bravery for civilian animals. Police Dog Ozzy is the 25th recipient, all of which have been dogs.

The PDSA Order of Merit recognises animals that display outstanding acts of devotion above and beyond normal companionship. It also recognises animal acts which represent the special relationship that exists between animals and humans. Police Dog Sweep and Sabby are the 5th and 6th canine recipients of the honour, which has been awarded 16 times since its institution in 2014.

Get Our BEST Dog Magazine Content
Enter your email and never miss out on receiving our best articles:
amazing courageous dogscanine braverystories of heroic dogs