The area of Benissa on the popular Spanish holiday destination of Costa Blanca has reportedly become ‘a hell for dog owners’ because dogs are being poisoned by eating affected meat that is being scattered around the area. There is concern for other wild animals and in particular cats as well. It is allegedly not the first time it has happened. Locals, many of whom who are desperate, angry and fearful, are suspecting hunters, but nothing has been confirmed. Police investigations are in progress according to the council.

Describing the situation, a local English lady said: “This walkers´ paradise on the Costa Blanca has been turned into a hell for dogs and their owners. The few dog walkers we still see in this lovely Benissa are clearly in despair, their dogs on a tight leash.

“The word ‘poison’ is on everyone’s lips. Nothing else is being talked about. We think hunters are behind it, who in this cowardly fashion are killing people’s beloved animals.”

The council of Benissa has responded to the situation and a spokesperson informed the writer of this press release they have been coordinating efforts with the police of the Guardia Civil and Seprona, and Spanish animal-rights party PACMA (Partido Animalista Contra el Maltrato Animal, or Animalist Party Against Mistreatment of Animals).

He also said that the local press had been informed and that the police had been patrolling the area since the first reported case on March the 18th of this year. 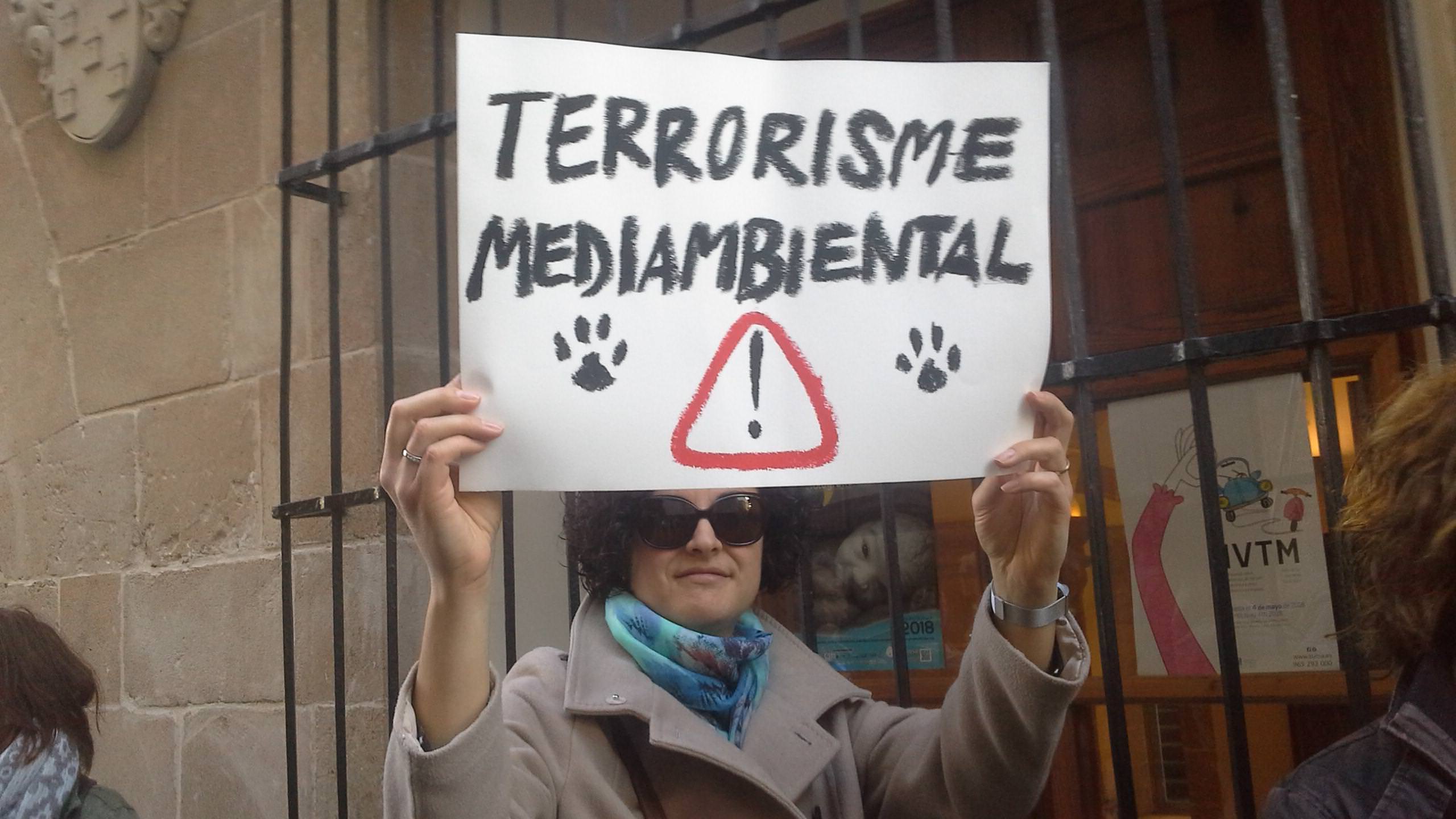 Maria Jose Sanchez, territory manager of PACMA, said on April 11: “A few days ago the Alicante PACMA team had a meeting with the mayor of Benissa and the Guardia Civil to try to get a picture of what is going on. At the moment we know there are 28 dogs who died and a few wild animals. We have reports from vets which state the poison is strychnine, which means a painful death.”

Strychnine is illegal in Europe and is known globally for its use to intentionally kill dogs.

On April 23, the council spokesperson informed the writer of this press release that the municipality had not received any new information from Seprona, but that investigations were ongoing.

Local people themselves had also responded to the situation with a demonstration on the streets of Benissa on March 27. It is estimated a mixed crowd of about 300 local people turned up. The march was described by some who took part as ‘emotional, noisy and angry’, with many dog owners who had lost their dogs to poison carrying billboards showing their photos. 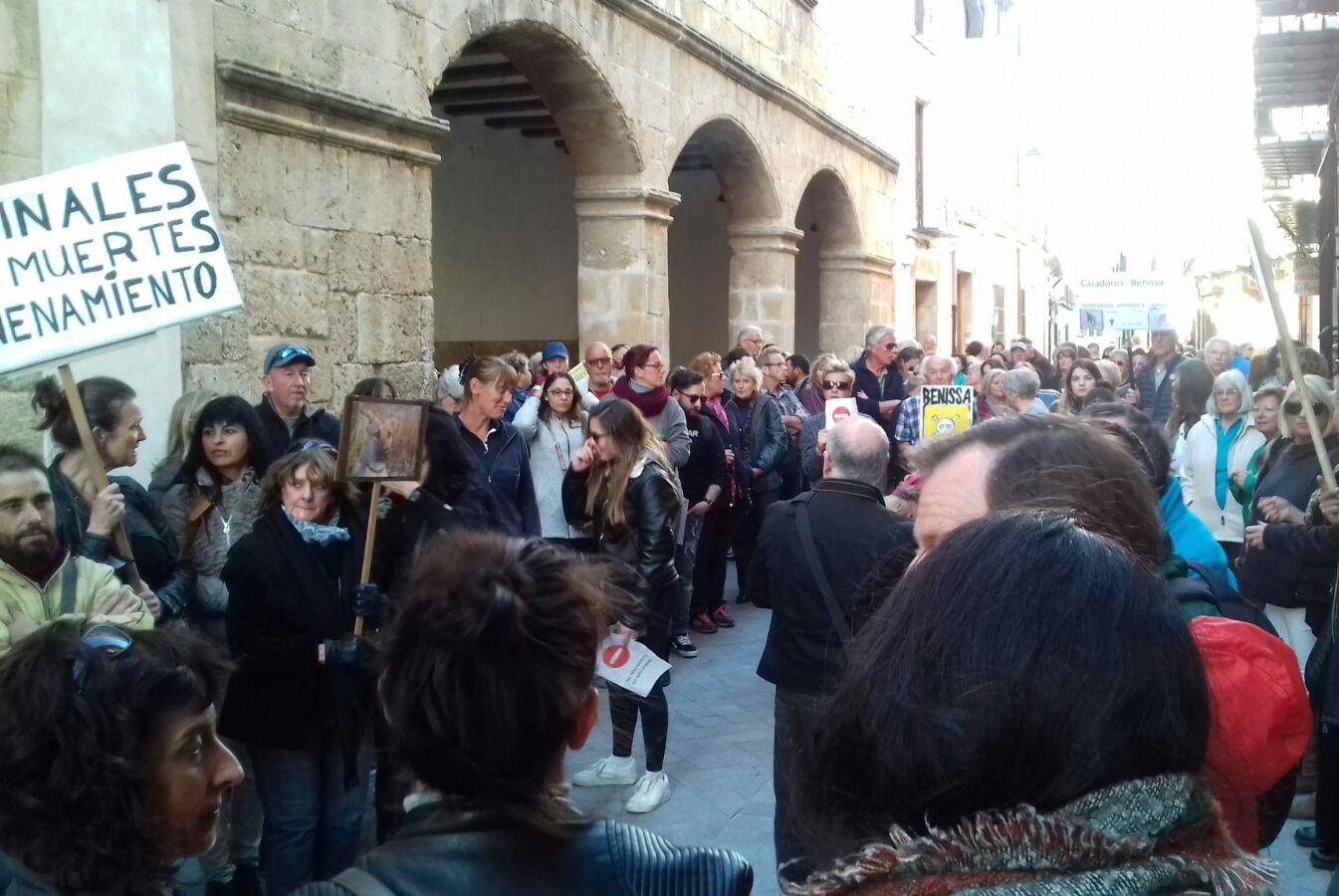 One of those was Jordan, a Spanish dog who was poisoned this March whilst being taken for a walk on the lead. The tragic event happened shortly after her owners, Dutch Spain lovers, had spoken to local press about the danger to pets in this area of Spain, and they themselves have since vowed to never return to Spain.

A toxicological report of Jordan was sent to a laboratory via the Guardia Civil (the Spanish police unit) by the vet Isidor Mollà, owner of Benissa veterinary clinic, who had earlier said the dogs poisoning was ´the work of professionals’. At the time of writing it is unclear whether a result from this report has come back.

Although there are some new fines of up to €30,000 for assault or abandonment of animals in Spain, when it comes to animal legislation in Spain, there is a great deal of uncertainty among the population about the effectiveness of the police and the proper enforcement of animal laws. 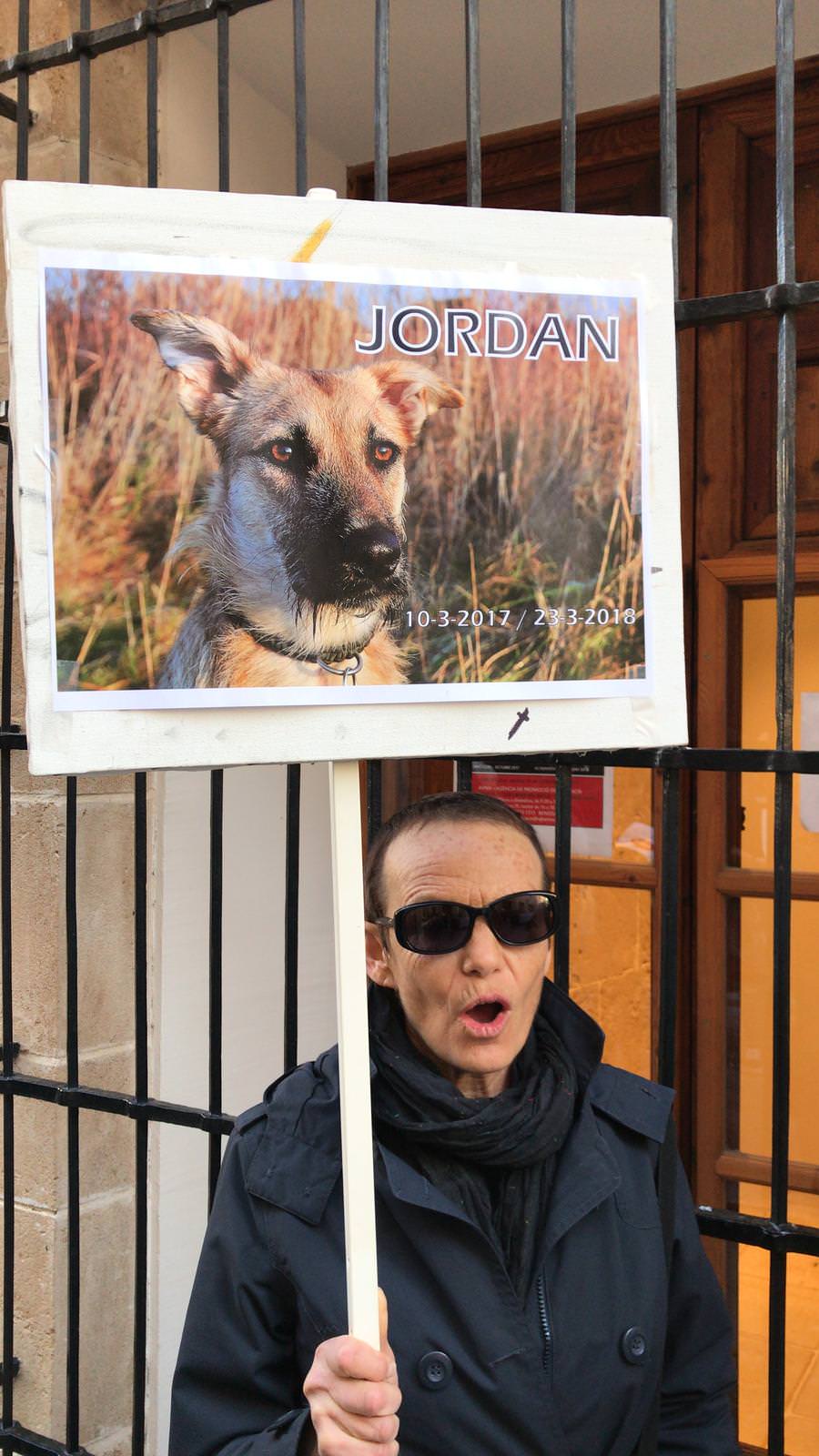 The demonstration ended up at with a full council meeting at the Town Hall, with the Mayor of Benissa, Abel Cardona Castell, present. During the meeting, the mayor pointed out the low number of reports and urged owners of poisoned dogs to report their cases to the Guardia Civil. 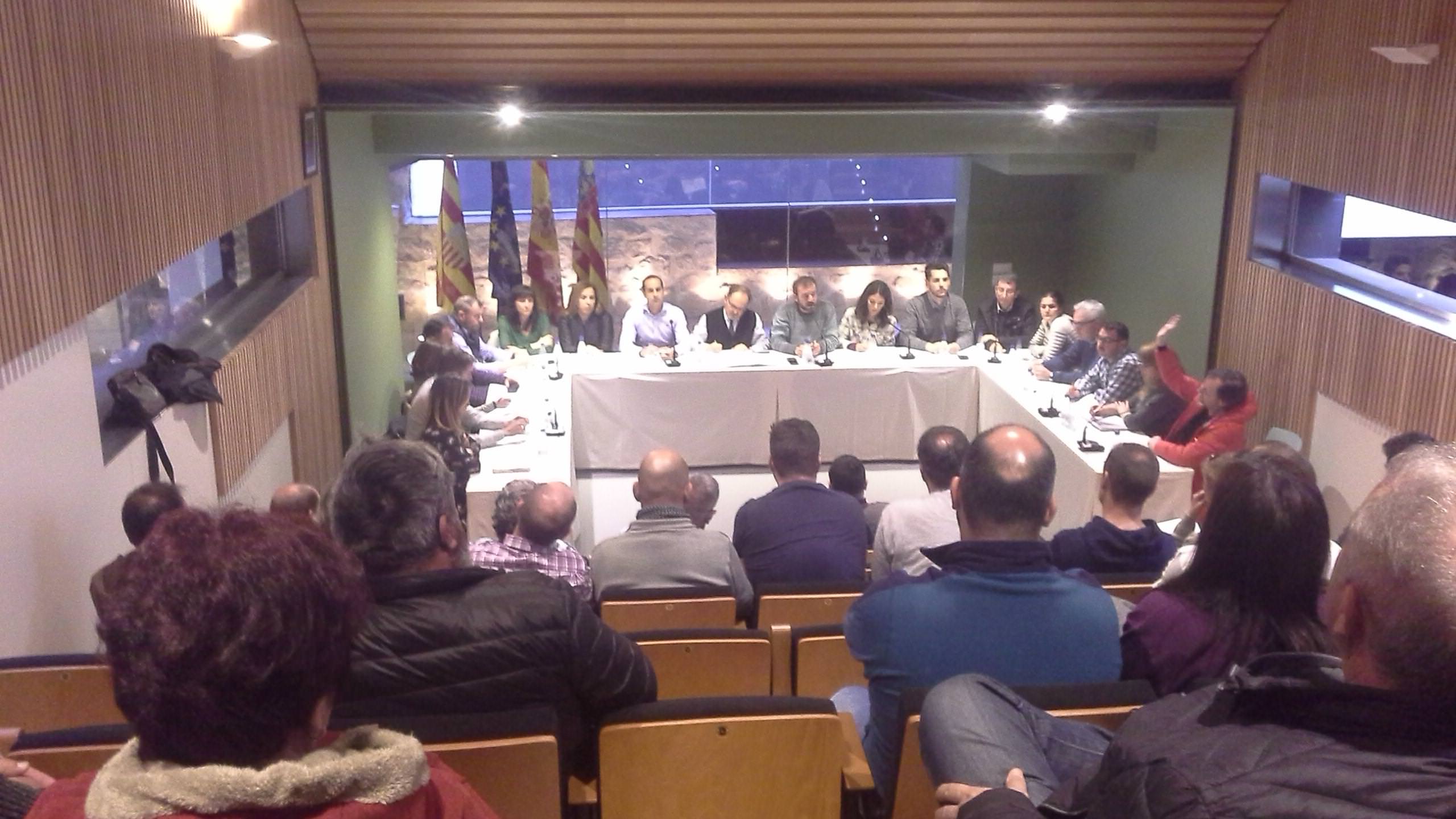 The fact that many locals suspect hunters was also put forward. Spanish hunters, who suffer a notorious international reputation for ‘hanging, drowning and poisoning 50,000 Greyhounds a year’ and leaving their dogs to ‘die en masse’, are known for shooting rabbits and would be motivated to kill foxes or free-roaming pet dogs for being a potential threat to the rabbit population.

This is not the first report of dog poisoning in Spain and for example, in 2017 it was described how ‘pet killers’
were ‘operating on the Costa del Sol’.

There have also been local news reports, and last year nine animals had been poisoned in Benissa. This too had reportedly prompted a Seprona investigation but the results are unclear at the time of writing.

Referring to the recent poisonings, Sanchez argued it is no wonder that in Spain a police department is dedicated to the environment and animals [Seprona], and that a stronger enforcement of the law is ‘absolutely necessary’. She attributed this to a lack of budget, staff and government support among others, and added that stricter sentences for animal abusers are needed, who, Sanchez reasoned, only ‘rarely go to prison once found guilty of animal offences.’

PACMA (Partido Animalista Contra el Maltrato Animal, or Animalist Party Against Mistreatment of Animals) is
the Spanish animal-rights party, which has been running educational programmes in Spanish schools and universities, has been calling for changes in the law, and the party was quoted in EL Pais in 2016 that in terms of animal rights, although ´progress was being made’, Spain was ‘running 20 years behind its neighbouring countries’.

“Every little change that we achieve in our society gets us closer to a more advanced, compassionated and respectful society,”  Sanchez said: ¨We have to start at schools. We have to create a strong police department
working in animal abuse showing to the community that animal cruelty is not without a price”

Some residents hope that recent developments will serve as a warning for the large number of British, German, Belgian and Dutch dog owners who plan a trip to the Costa Blanca.

Get Our BEST Dog Magazine Content
Enter your email and never miss out on receiving our best articles:
Spanish killer poisoning dogs