The US may be under the political spotlight across the globe as election battle matters continue to ripple after last year’s shock presidential result, but a bill to introduce tighter laws for animal welfare has united four US representatives across both parties. 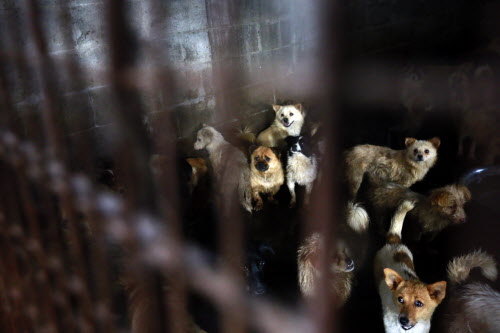 In a move to stop the cruel trade from taking hold in the United States, the bill (the Dog and Cat Meat Prohibition Act of 2017) would amend the U.S Animal Welfare Act to prohibit the slaughter and trade of dogs and cats for human consumption and would provide penalties for individuals involved in the dog or cat meat trade.

In the United States, dog and cat meat eating is limited but the new bill will prevent domestic trade and imports, and serve as an important symbol of unity with countries and regions such as Thailand, Hong Kong, the Philippines and Taiwan that have dog meat bans in place. Pictured above (L-R), CoS Lale, Congressman Hastings and celebrity dog lover Bonnie-Jill Laflin, as the star met with the duo saying on Twitter “Great seeing friend @RepHastingsFL & CoS Lale, 2 continue our talks on his work on ending dog/cat meat trade! He has reintroduced the Res!” 30 million dogs a year are killed, cats too

Humane Society International (HSI) is one of the leading organisations campaigning across Asia to end the dog meat trade that sees around 30 million dogs a year killed for human consumption. It’s a trade that subjects dogs to horrifying treatment and similar problems face an untold number of cats.

Kelly O’Meara, director of companion animals and engagement for Humane Society International (HSI) said: “Through our work in China, South Korea, Vietnam and Indonesia, we are urging policy makers to take decisive steps to end the trade. A similar law here in the United States would show important solidarity with those that have already enacted bans and inspire more to join the cause. We applaud Congressmen Hastings, Buchanan, Trott and Boyle for introducing this bill and their commitment to ending this brutal trade.” Calling an end to the dog meat trade in Asia has become an issue forefront in many dog lovers minds, including Real Housewives of Beverly Hills star Lisa Vanderpump who has used her position on the show to shine a light

Last year, and again this year, Congressman Hastings introduced a Congressional Resolution condemning China’s Yulin dog meat festival. Dog meat traders in China launched the festival in 2010 to increase sales, but popular outcry, both internationally and within China, has dramatically reduced the scope of the festival that takes place every year during the summer solstice. HSI and its Chinese partner groups have been on the ground every year to uncover the cruelty of the festival, and to stop the illegal transport of dogs into Yulin. Last year, HSI and its local partners rescued 170 dogs and cats from slaughterhouses on the outskirts of Yulin and transported them to the US, UK and Canada for adoption.

“Many people would be shocked to learn that it is still legal to slaughter dogs and cats for the purpose of human consumption in 44 states,” said Congressman Hastings. “This legislation will prohibit these practices and unify the animal cruelty laws across our country by explicitly prohibiting the slaughter and consumption of our most beloved companions. I am proud to join my colleagues on both sides of the aisle to fight against these cruel and inhumane practices.”

Get Our BEST Dog Magazine Content
Enter your email and never miss out on receiving our best articles:
Bill introduces US ban dog and cat meat trade