A tiny puppy who was found with his front legs tied together and dumped in a handbag is winning over the hearts of RSPCA staff caring for him.

Eight-week-old Radley was found by a member of the public in the early hours of Monday morning (17 September).

RSPCA Inspector Phil Norman, who is investigating, said: “We received a call from a woman who’d found a little puppy in a red handbag fastened to the door handle of a charity shop in The Broadway, Greenford. 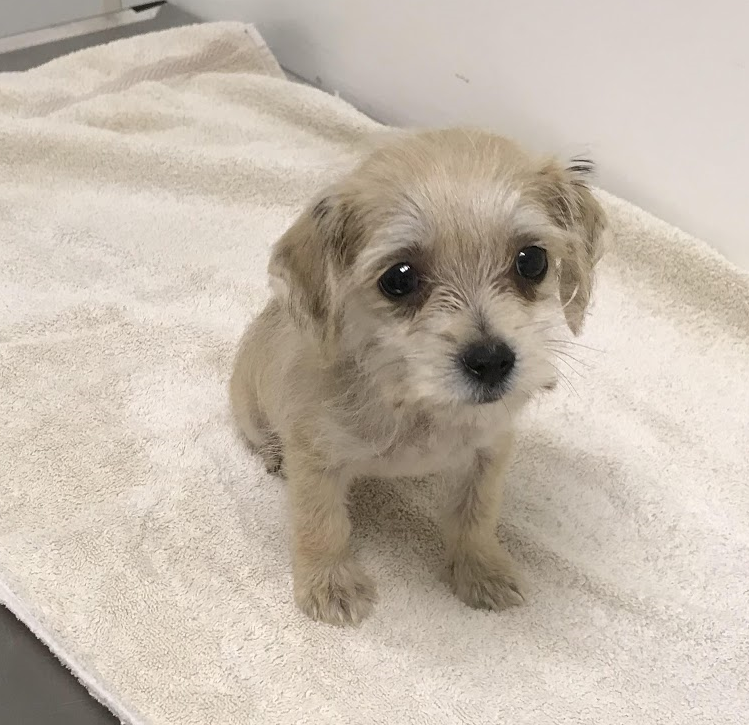 “It was around 2am on Monday morning.

“The pup’s front paws were tied together with an elasticated hairband (pictured). There was also an unopened tin of dog food in the bag and a note stuck to the outside saying ‘Found this puppy’.”

The small, male puppy – thought to be a border terrier cross – initially had some damage to his paws where the hairband had cut off his circulation but has now recovered and seems to be moving well.

He is in fairly good body condition but has had diarrhoea so is being monitored.

Inspector Norman is now investigating how the little pup came to be dumped in the handbag and why he was hobbled in such a way.

He said: “Poor little Radley must have been very stressed and frightened being stuffed into that handbag and abandoned in the middle of the night.

“The hairband would also have caused him some pain and restricted his movement, adding to his distress.

“There’s absolutely no excuse for leaving a young, vulnerable puppy like this in such awful circumstances and Radley is lucky he wasn’t more seriously injured.”

Radley was taken to the RSPCA’s Putney Animal Hospital, in south-west London.

Inspector Norman has spoken to the local shops and is gathering CCTV in order to trace whoever is responsible for abandoning the pup.

He’s also seeking any witnesses who may have seen anything suspicious in the area at the time or who recognise Radley to get in touch by calling the charity’s appeal line on 0300 123 8018.

London veterinary director Caroline Allen said: “As this little pup was found in a handbag we decided to name him Radley – and he’s now winning over the hearts of all of the staff here!

“He’s doing really well and is such a cutie. He’s not available for rehoming yet and we’re still running tests and checks on him so he’ll be with us a little longer yet.

“We know that many people will be concerned about gorgeous Radley and want to offer him a home but we would ask people not to call the hospital about him. Once Radley has received all the necessary treatment he will be rehomed via one of our animals centres. If we get too many calls it can impact on people trying to contact us in an emergency.”