The RSPCA has issued a stark warning to anyone considering buying a puppy as a Christmas present – after an officer was called out to the bodies of six pups believed to have come from a puppy farm.

RSPCA inspector Jaime Godfrey was called by police to a layby off the junction of Amersham Road and Bottrells Lane in Coleshill, Amersham, on Wednesday afternoon (29 November) after six puppies were found dead.

“The pups were wrapped up in two kids’ t-shirts and a towel inside a bag that had simply been chucked onto the verge,” inspector Godfrey said.

“It’s not clear how the puppies died and they weren’t microchipped or identifiable but due to the different breeds, my guess would be that they’ve come from a puppy farm nearby.

“There were three Labrador types, one Chihuahua, one Jack Russell terrier and another terrier type. The mixed bunch of breeds suggests that they were ‘waste’ from a nearby breeder trying to cash in during the run-up to Christmas.”

++WARNING – Image Below Has Been Censored But Is Still Distressing++

Inspector Godfrey is now investigating where these puppies came from and is appealing to anyone who may know who is responsible for dumping them or who saw anything suspicious in the area to get in touch by calling 0300 123 8018 and leaving a message for him.

“It’s utterly heartbreaking that these poor puppies never had the chance to find a loving new home, to play with the children over the school holidays or to curl up in front of a fire on Christmas Day,” inspector Godfrey said. “And while that’s the image people have when they think of buying a puppy for Christmas, sadly this can sometimes be the reality. And, tragically, it’s something we see all too often.” 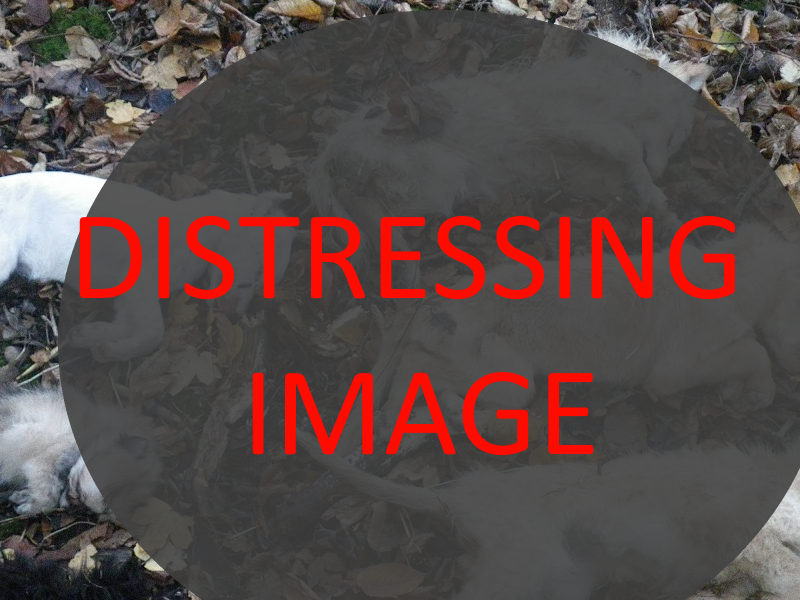 The harrowing find came just 20 miles away from similar discoveries made in the Hertfordshire area. In February last year, the bodies of nine puppies – of mixed breeds – were found dumped in Hogg End Lane, St Albans, and the following month, two more dead puppies were found in the same spot. Remains had also been found at the same site just a few months before.

Then, in March this year, the bodies of four newborn pups were found dumped in a carrier bag in Three Cherry Trees Lane, Hemel Hempstead.

Inspector Godfrey added: “There are lots of unscrupulous breeders and dealers out there who are indiscriminately breeding and importing puppies to make a quick buck during the Christmas frenzy. But, unfortunately, many of these underground dealers will put profits ahead of the health and welfare of the dogs and families are left with extremely sick puppies, dogs with behavioural problems and huge vet or behaviourist bills.

“That’s why we, and other welfare organisations, would urge families to be extremely cautious when looking to buy a puppy and to use the Puppy Contract to help ensure they buy a happy and healthy dog. We’d encourage any prospective dog owners to properly think about whether they are prepared for the commitment of taking on a pet for the rest of his or her life and to consider adopting a dog from a rescue centre.”