A man has been jailed after admitting a string of offences following an RSPCA investigation into dog fighting after a training yard was discovered in a sleepy, country village.

Neil Forrest (DoB: 26/06/74) of Meadow View, Aspenden, in Hertfordshire, appeared at Stevenage Magistrates’ Court on Thursday (15 February) for the start of a two-day trial but entered guilty pleas to three of four offences, including causing unnecessary suffering to a dog and keeping or training a dog for use in connection with an animal fight.

He was sentenced to a total of 24 weeks in prison and was disqualified from keeping all animals for life. He was also ordered to pay £750 in costs. 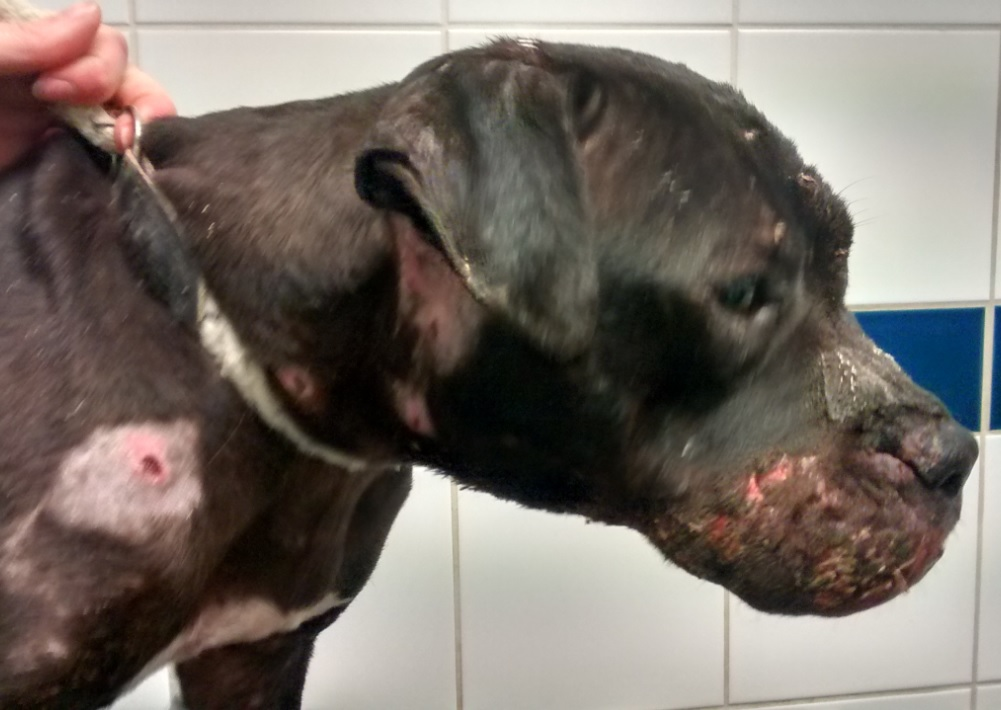 RSPCA inspector Cliff Harrison, who led the investigation, said: “Aspenden is a sleepy little village and Forrest’s home looks like any other normal, family bungalow. But behind closed doors, Forrest was involved in the barbaric and brutal dog fighting underworld – a secret he kept well hidden until one of his dogs went missing one day and was found by a member of the public cowering in their garden nearby.”

On 5 March 2017, a black and white Staffordshire bull terrier type bitch was found covered in wounds and scars (pictured). She was collected by a local charity and taken to a vet who alerted the RSPCA.

“This poor dog was absolutely covered in wounds – both fresh and historic – with bite marks, scratches and puncture wounds predominantly around her muzzle, ears and legs,” inspector Harrison added.

“These sorts of injuries are exactly the sort of thing we we see when dogs are forced to fight another dog and the vet agreed that the injuries were consistent with dog fighting.

“Veterinary staff said they thought her freshest wounds were around three to four days old so we suspect she’d been used in a fight just a few days earlier.

“Luckily for this girl – nicknamed Kali by staff – we were able to treat her and she is now fully recovered and receiving lots of TLC in RSPCA care.”

While Kali was being treated a number of calls were made to local vets and dog wardens reporting a missing black Staffie. Three different numbers were noted down, one of which was traced back to Forrest and two others, believed to be his friends’, which were later found on his mobile phone. 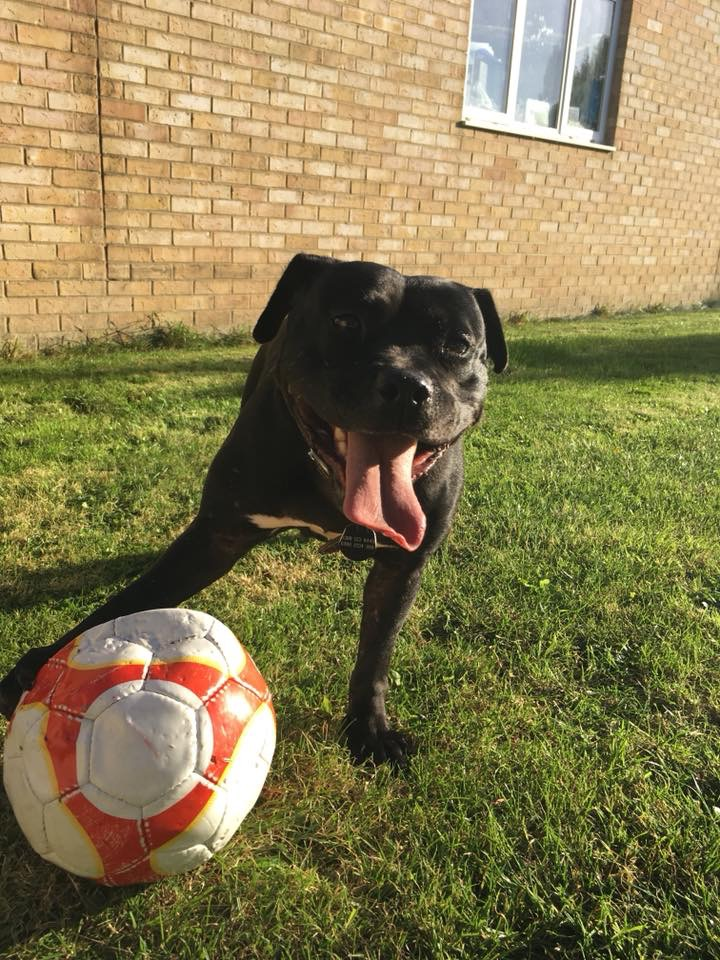 Kali was seized by police and placed into the RSPCA’s care. A police dog legislation officer* concluded that she was not a banned breed so she can now be rehomed (pictured, now).

On 19 May, RSPCA joined Hertfordshire Constabulary to execute a warrant at Forrest’s home where three further bull breed type dogs were found at the premises along with a spaniel**.

“When we raided Forrest’s home with found three dogs kept in kennels in the garden, two of which were extremely athletic, fit bull breed types which were restrained with thick collars and chain tethers within the kennels,” inspector Harrison added.

“A third bull breed was found in a crate in the garage and a fourth dog – a spaniel – was also found although there were no concerns for this dog.

“We also found books and articles on pit bulls and dog fighting, and we recovered a photo of Forrest holding a dog in his garden suggesting it was a three-time champion with ‘Neil’s Yard’ written on the back.

“Inside the garage we found a treadmill and scales – often used by dog fighters to train their dogs and prepare for a fight – but when we interviewed Forrest he denied having any involvement with dog fighting.”

RSPCA inspector Cliff Harrison, who led the investigation, said: “It’s clear from the evidence that Forrest is obsessed with dog fighting and is involved in keeping, training and fighting his dogs.

“It appears he has tried to run his own dog fighting yard – called Neil’s Yard – but it’s unclear whether he’s had much if any success with that.

“What is clear is that his dogs have significant injuries consistent with dog fighting and have clearly been caused suffering due to his pastime.

“We believe he has been involved in this abhorrent, secretive bloodsport for years.”

Peter Madden, dog advisor for the Bedfordshire, Cambridgeshire and Hertfordshire Dog Unit, said: “We were pleased to be able to support our RSPCA colleagues with this investigation and the jointly executed warrant at Forrest’s address.

“I am pleased with today’s sentence and hope it sends out a clear message to anyone considering being involved with dog fighting in any way. We take reports of this nature and animal welfare very seriously.

“We will always take action and I am glad the court has recognised the severity of the offences by issuing a custodial sentence and by banning Forrest from owning animals for life.”

The court also ordered for Forrest to be deprived of ownership of Kali who RSPCA staff will now seek to rehome.