Meet Romeo, a seven-year-old hero Staffy who has saved more than 30 dogs’ lives with blood donations and is a regular visitor to a hospital and care homes as a therapy dog.

A friendly and happy dog, in his role as a Pets As Therapy dog, he visits patients at the Lister Hospital in the stroke ward as well as popping into a care home where he brings some much-needed joy to everyone he meets.

Like other therapy dogs, Romeo helps to comfort the people he meets who may have owned dogs in the past and are no longer able to get out to see animals. 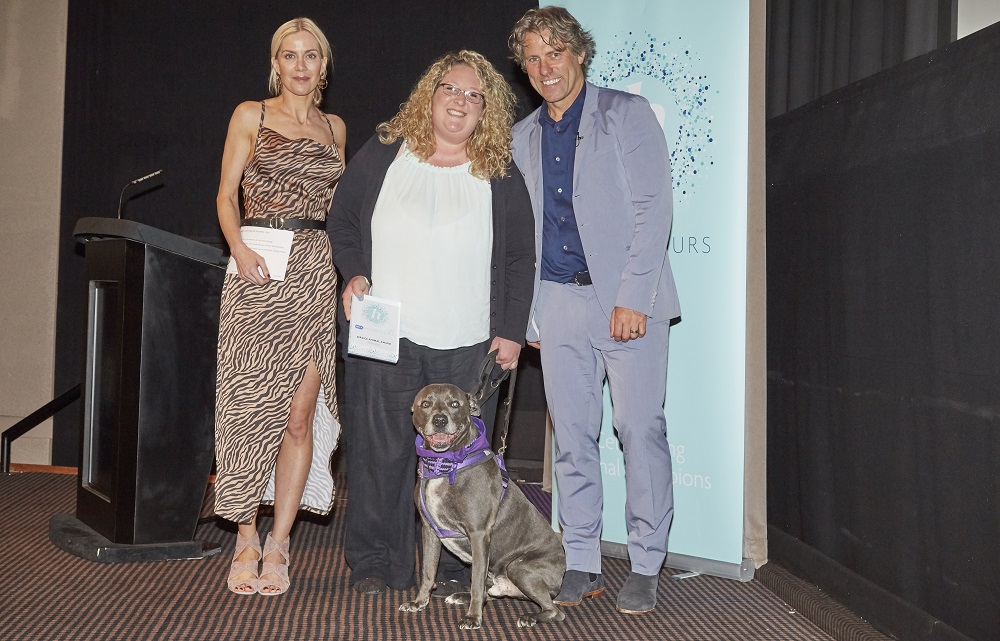 He is also a blood donor for the Royal Veterinary College and has so far saved 38 dogs’ lives through his vital donations.

As a result of his life-saving work, Romeo was presented with the Service Animal Award at the RSPCA Honours, presented to him and his owner by animal lover and TOWIE star, Pete Wicks.

His owner, Steph Hartley said, “I’m so proud of him for winning and I’m proud of him all the time. I think it’s wonderful and so nice for him to get recognition for what he does and how special he is as he’s such an amazing dog.”

Steph explained that when she first got Romeo, at just five months old, he was a typical, excitable puppy.

She said: “I was living with my parents at the time and their two miniature dachshunds. My nan moved into assisted living and was coming round to our house a lot and I was worried he would jump all over her as he’d be really excited but he didn’t. He’d be running around like crazy just a minute before and then when she arrived he very calmly and gently laid next to her, making sure he wouldn’t knock into her. He was always like that with my nan, it was like he just knew he had to act a different way around her which made me think he would make an amazing PAT dog.

“When my parents’ dachshund Shadow was diagnosed with lymphoma and was receiving chemo at RVC I would take Romeo along to the vet appointments to keep Shadow company and get Romeo used to being at the vets. He was so good at the vets and the nurses said they were in desperate need of blood donors and asked if we would consider it when Romeo was old enough. I had never really thought about pet blood donation before but of course they need blood just like we give blood so when he weighed enough, I took him and he absolutely loved it.

Steph added: “Romeo is a staffie and for some people that comes with some misconceptions about the breed but he is the biggest baby, he weighs 28kgs and he still wants to sit on my lap. He’s the sweetest, loveliest dog, and it’s really nice to show just how wonderful staffies are and that the bad press they sometimes get really isn’t fair.”