Tabitha Willett has called on fashion house Chanel to explain having two dogs locked in small cages in their Sloane Street store in London at 11pm.

A well-known dog lover, the former reality star called on Chanel to answer for their actions and was told the dogs were in store for “security purposes”. 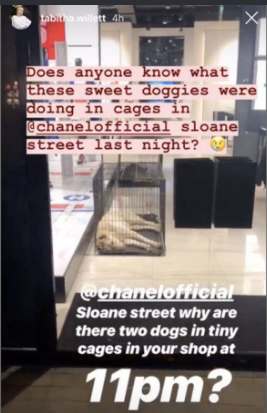 According to Sky News, Chanel reportedly told Willett the dogs were kept in the cages for a “few” hours at a time, and were under the watchful eye of a handler.

She has since reported the issue to the RSPCA.