The winner of Animal Friends’ 2019 £100K Charity Giveaway has been revealed, and the news will benefit dogs and cats around the world.

From the end of October, animal lovers cast their vote for their favourite of the three finalists: Bat Conservation Trust, FOUR PAWS and the Whale and Dolphin Conservation on the Animal Friends website and today, FOUR PAWS – an international animal welfare organisation committed to encouraging people to treat animals with respect, compassion and understanding around the world – have been announced as winners of the £100k prize by the pet insurer. 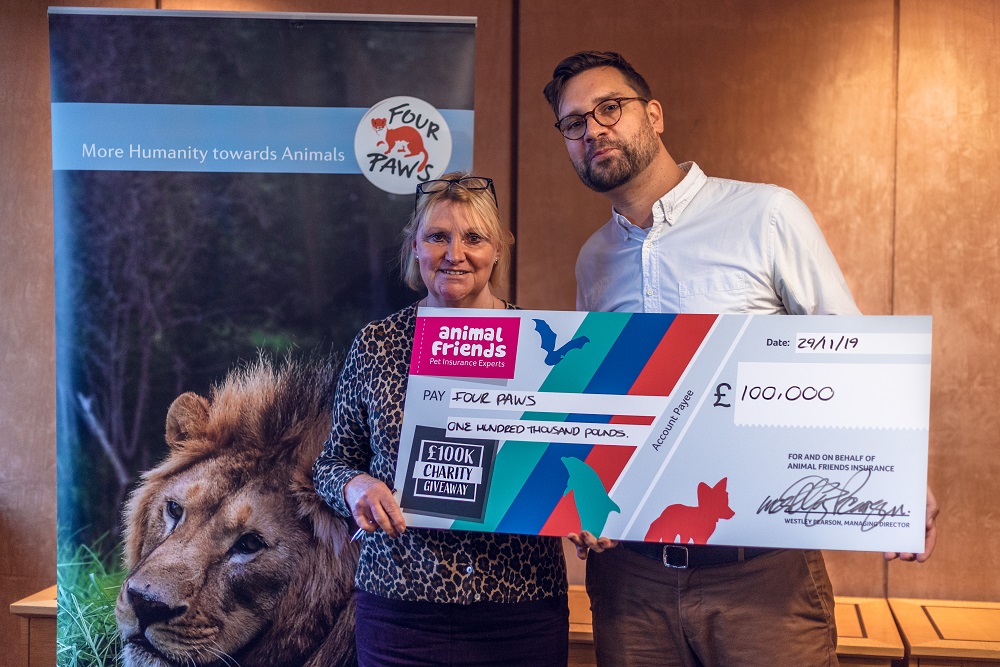 Brian da Cal, FOUR PAWS UK Country Director commented on his organisation’s win saying, “We are over the moon to have won Animal Friends £100K Charity Giveaway. A huge thank you to our supporters and the general public for voting for FOUR PAWS, without whom this win would not have been possible. As we move towards 2020, this is an amazing boost that’ll help us to rescue even more animals around the world from abuse, exploitation and neglect.”

The two runners up, Bat Conservation Trust and the Whale and Dolphin Conservation, have also received a donation of £15,000 from the pet insurer for their campaign work.

Chris Butler-Stroud, CEO from Whale and Dolphin Conservation said, “We’d like to say a huge thank you to everyone who took the time to vote for us, your support is vital to the work we do here at Whale and Dolphin Conservation. We’re thrilled to have received this incredibly generous donation that will go towards keeping whales and dolphins safe and free. We want to extend our thanks to Animal Friends for running this event and their support of so many worthwhile causes.”

Dr. Joe Nunez-Mino, Director of Communications & Fundraising at the Bat Conservation Trust added, “It has been a huge privilege and great fun to be part of the Animal Friends Charity Giveaway this year. The support our existing supporters showed was really uplifting and the competition engaged new audiences who became more aware of the work we do. The unexpected donation from Animal Friends is a welcome contribution towards achieving our vision of a world rich in wildlife where bats and people thrive together- thank you!”

Although this was the second year Animal Friends has run its £100k Charity Giveaway, the pet insurance company is not new to charitable giving. Since launching in 1998 with the sole aim of providing pet insurance as a means to help support animal welfare charities, they have proudly donated over £4 million to animal charities in the UK and around the world.

Wes Pearson, Animal Friends Insurance Managing Director concluded, “To hear what a difference the donations will make to animal welfare across the world is very special. Everyone at Animal Friends is passionate about keeping animals safe in their environments and able to live healthy and happy lives.

“We are all looking forward to hearing more about how these donations help the three charities in their amazing work.”

Get Our BEST Dog Magazine Content
Enter your email and never miss out on receiving our best articles:
£100K Charity Giveaway 2019