A Search and Rescue Dog from Dorset who found a missing 90-year-old dementia patient and helped to convict a murderer has been posthumously awarded the PDSA Order of Merit – known as the animals’ OBE – for his outstanding devotion to duty and service to society.

The Border Collie named Charlie, who passed away in 2017, worked with his owner and volunteer handler Matt Cooke.

Speaking about Charlie’s award Matt said: “Charlie was my boy. My dog of a lifetime. He was a pleasure to train and work alongside, and I am immensely proud of everything he has achieved in his career. For him to receive the PDSA Order of Merit, even after he has left us, is such an incredible honour. I am thrilled to have Zak (pictured below) – his Hampshire Search and Rescue colleague – accept the medal on Charlie’s behalf.” 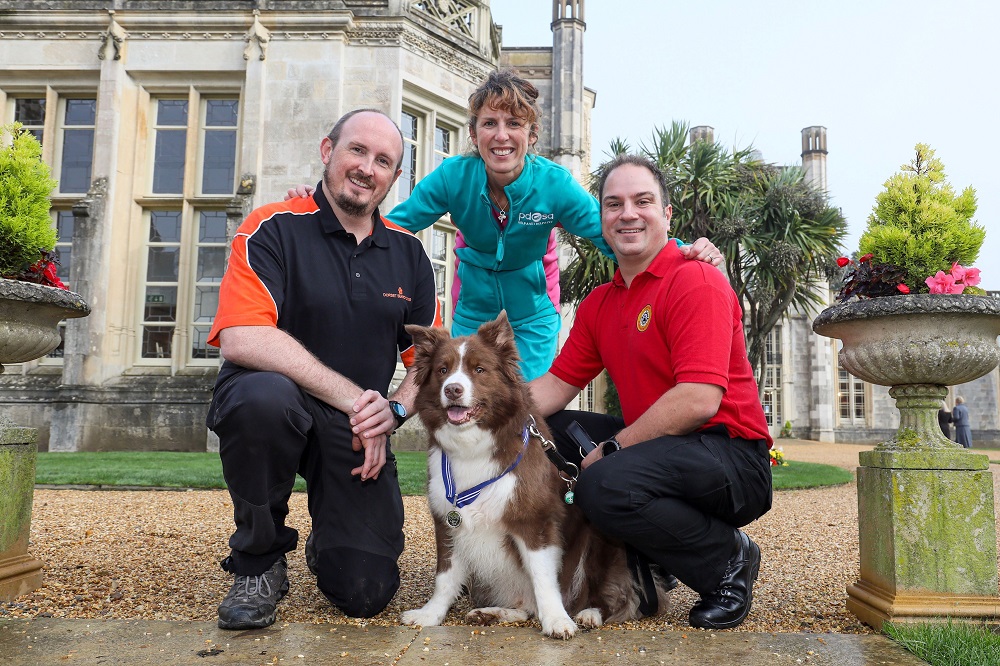 Charlie started training as a Search and Rescue Dog with his owner, volunteer handler Matt Cooke, when he was 14-weeks-old, qualifying in November 2005.

He soon attained the highest level of qualification and subsequently spent ten years in service with Dorset Search Dogs and Lowlands Search and Rescue. In this time he completed hundreds of searches and amassed thousands of search hours.

Renowned for his phenomenal scent detection, Charlie could cover large areas of ground quickly, freeing up valuable Emergency Service resources to deploy elsewhere. As well as locating missing people, Charlie’s work enabled areas to be eliminated from a search, thus narrowing the focus of the Emergency Services. His methodical and reliable approach to searching earned him an enviable reputation within the Search and Rescue community.

In addition to his search duties, Charlie helped recruit and train other dogs to work in specialist taskforces. He also represented Search and Rescue Dogs in the House of Lords, raising awareness around quarantine and pet passports for specialist dogs travelling abroad.

Charlie located an elderly and vulnerable lady who had been missing for 14 hours in freezing temperatures. Police and ambulance services reported that had Charlie not found her when he did, she wouldn’t have survived.

In May 2008, Charlie located a murder victim buried in a large field, leading to a conviction.

Also in May 2008, Charlie located a missing 90-year-old dementia patient who had become disorientated and bogged down in mud.

In February 2009, Charlie and Matt were sent to Ascension Island in the Southern Atlantic, to help search for a missing woman. Charlie, along with two Thames Valley Blood Detection dogs, searched the entire island in brutal conditions and terrain. Such was Charlie’s reputation, the fact that no one was located gave closure to the search. Clearing a search space in this way is often as important as making a positive find.

Charlie was called to search a fire-damaged squat for fatalities. One homeless man was known to have lost his life in the blaze, which took 50 firefighters and 13 engines to put out. Charlie’s skills were called upon to ensure that there were no other fatalities in the building, which became structurally unsound. His subsequent search enabled the building to be cleared for demolition.

Charlie retired at the end of 2015, enjoying a full and happy retirement until he passed away in December 2017. He is 32nd recipient of the award since its institution in 2014.