The RSPCA is releasing a video to mark the 26th anniversary of the Dangerous Dogs Act and controversial breed specific legislation – and one year since the charity launched its high-profile #EndBSL campaign.

Saturday (12 August) marks 26 years since the Dangerous Dogs Act (DDA) was introduced to the UK, including Section 1 which applies breed specific legislation (BSL) and bans four types of dog – the pit bull terrier, the Fila Brasiliero, the Dogo Argentino and the Japanese Tosa.

Last year, the RSPCA published a report into BSL and how it has failed to protect public safety since its introduction (hospital admissions due to dog bites has increased year on year) and how it seriously compromises dog welfare. The charity – the UK’s oldest and largest animal welfare organisation – also launched its #EndBSL campaign calling for the Government to review the ineffective legislation and replace it with something that will better protect public safety and improve the welfare for all dogs affected by it.

RSPCA dog welfare expert and lead author of ‘A Dog’s Dinner’ report, Dr Samantha Gaines, said: “Almost 80,000 people have signed our petition and want to see a review of this ineffective and outdated piece of legislation.

“Our campaign has also had support from experts and organisations around the world, showing that this is an issue close to the hearts of many people from many corners of the globe.

“Many believe that, ultimately, the law should be repealed and replaced with something that is fit for purpose – something that better serves to protect the public and which doesn’t punish dogs because of how they look, irrespective of their behaviour or whether they pose any risk to the public.”

BSL makes it illegal to possess or own any of the four banned types in the UK. Dogs suspected of being of a prohibited type are typically seized from their owners and kennelled so that they can be assessed by a police dog legislation officer. This process can take several days through to weeks.

If officially identified as being of type, and the dog is not considered to pose a risk to public safety owners can apply to have their pet added to the exemption register which allows them to be lawfully kept but they must both comply with a very strict set of rules including keeping their dog muzzled at all times when out in public. Kacey (pictured above) was just three-weeks-old when her mother and eight siblings were seized under Section 1 of the DDA. They were held in kennels for more than six months before being assessed.

All nine puppies were identified as prohibited types but the decision about two of the puppies – including Kacey – was, at a later point, overturned allowing them to be rehomed – the other seven were tragically put to sleep. Mum, Mercedes, was typed and later exempted which meant she could be lawfully kept under the Dangerous Dogs Act.

Kacey’s owner, Nay Beard from Devon, said: “This is where an already sad story almost defies belief. Nine puppies, the same litter, from the same parents but – for the grace of a couple of centimeters, two of their lives were saved. The others weren’t so lucky.

“Although Kacey got the chance to live, her incarceration under this cruel and unfair law impacts on her daily.”

Kacey was terrified of people and the outside world.

“She was frightened of grass, a breeze, water bowls, even toys. Absolutely anything and everything frightened her, she would back away while shaking uncontrollably,” Nay explained.

“Little by little, she got there. But even now, almost five years later, she’s still very nervous and anxious.” 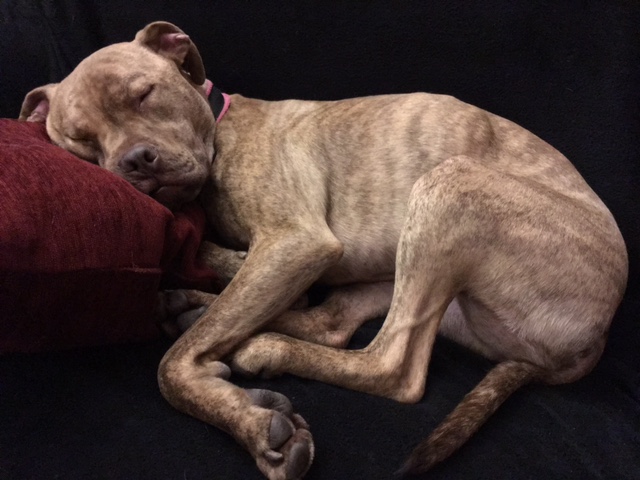 Peanut (pictured above) was born at the RSPCA’s Birmingham Animal Centre and soon rehomed by volunteer, Julie Wainwright. But, at nine months old, she was typed under BSL and Julie had to begin the long exemption process.

Peanut was later exempted but her life is impacted every day by the restrictions placed on her – simply because of the way she looks.

“Peanut is just like any other dog – she loves playing in the garden, sleeping on the sofa with her canine companion, Anna, and will follow you into the toilet if you don’t shut the door firmly behind you!” Julie said. “However, according to the law, she is dangerous. And therefore, she spends her life being restricted.”

Julie is still trying to get Peanut used to her muzzle and has to hire a private field so her pet can enjoy running off-lead.

She added: “I’ve not met one person who has been negative about Peanut when I’m out on a walk. A lot of people ask why she has a muzzle on and when I tell them that it’s because of BSL they always say say the law is ridiculous and what a lovely, lovely dog she is.”

To sign the RSPCA’s petition or find out more about the #EndBSL campaign, go to www.rspca.org.uk/endbsl.

Get Our BEST Dog Magazine Content
Enter your email and never miss out on receiving our best articles:
Breed Specific Legislationendbsl