Someone with legal paperwork in hand, enters your home. They scan your rooms for valuable goods. They see nothing of any resale value.  An outdated music system. An old TV worth, what, £30? Used furniture that will cost more to move than it would ever sell for. But wait. What’s this? A small, black, living, breathing real dog. The men with the paperwork collect up your dog, who’s terrified, carry him off to their van, issue you with a signed document and notify you that your beloved family pet will be put up for sale. On eBay, to the highest bidder.

Horrifying. But real. And it could happen to you.

Ahlen is a town in Germany. Debt collectors wanted to seize the wheelchair of a disabled resident who had run in to financial difficulties but they made a late swerve having decided the pedigree dog in the home probably had a higher financial value. So they seized the black Pug named Edda and they listed her for sale on eBay for €750 (£645).

Sadly, the case – first reported in German newspaper Ahlener Tageblatt – was far from over. 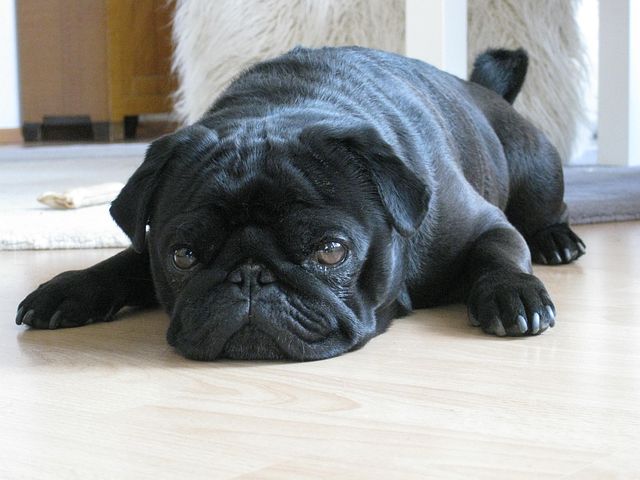 Edda was purchased from the online auction website by a police officer called Michaela Jordan. She was suspicious due to the low sale price of the dog (Pugs can sell for double the €750 Edda was listed for), so she called the number listed on the advert where she learned the dog had been seized because her former owner had fallen in to arrears with the local council, including money still owed – ironically – for dog tax.

The pug was healthy, she was informed, so Ms Jordan agreed to the purchase.

Now, she claims that Edda had medical problems (common to the breed) that were not disclosed at the time of the sale.

Ms Jordan is now seeing to recover hew own expenses – running as high as €1,800 and it is her demands for compensation that brought the case to local, national and now international attention, enabling the newspaper Ahlener Tageblatt to track down Edda’s original owner.

“How it all ended, that was absolutely not okay,” the former owner said, even accepting the seizure was legal.

She gave the paper details of what unfolded. Describing how a court bailiff and two city officials arrived at her home in November to search for valuables they could seize in respect to repaying her debts.

Local media reported that the bailiff considered taking a wheelchair that belonged to her disabled husband – city officials strongly deny this.

In the end they DID take her dog. And they DID sell her. And, rather shockingly, it WAS a legal seizure.

Edda’s former owner told the paper how much her three children miss Edda.

Now, you might question how something as obviously heartless as this could ever happen. Well, here’s the shocking truth. Dogs, as far as the law is concerned, have no greater status than your fridge-freezer, TV or that battered old sofa you haven’t yet got around to throwing out.

K9 Magazine spoke to Lauren Bowkett & Elizabeth West, solicitors with legal firm Cohen Cramer, who also offer expert legal advice on canine and equestrian matters. We wanted to know if what had happened in Edda’s situation could ever, legally, take place in the UK.

Can Dogs Be Seized by Bailiffs in The UK to Pay Off Bad Debts?

“In England and Wales, where a legal right to seize property has been obtained for civil debts, as a dog is a chattel (possession) you may think it could be seized. However, a pet is a protected item which cannot be seized by a bailiff to collect a debt.

“If it’s a canine business, and any dogs are an asset of the business, it may be more likely. However, there would need to be sufficient value to warrant seizure and any seizure would need to but take into account the dogs welfare (and the cost of this).

“In addition, a dog could be seized as a means of financial enforcement work. Under the Proceeds of Crime Act 2002 valuable dogs can be classed as available assets in POCA proceedings. The dogs may then need to be sold to make payment towards a confiscation order. This method of raising finances is harsh and in our opinion unenforceable, and something which can be successfully defended with the right representation.”

What’s your view? Do you think dogs should be ‘fair game’ for bailiffs collecting for bad debts? Tell us in the comments below.

Get Our BEST Dog Magazine Content
Enter your email and never miss out on receiving our best articles:
dog lawDog Seized by Bailiffs