The RSPCA is appealing for information after three newborn puppies were found dumped on top of a bin in Basildon.

Inspector Rebecca Benson went to Whitmore Way at the junction with Church Road after a call on Monday afternoon (12 February) reporting three dead puppies that had been found outside a row of shops.

She said: “I found the puppies to the rear of the shops. They were inside a pet carrier covered with a bin liner on top of a black and orange bin.

“When I opened the bag there were three tiny puppies inside. They were all extremely cold to touch and their bodies were stiff. Sadly, there were no signs of life.” 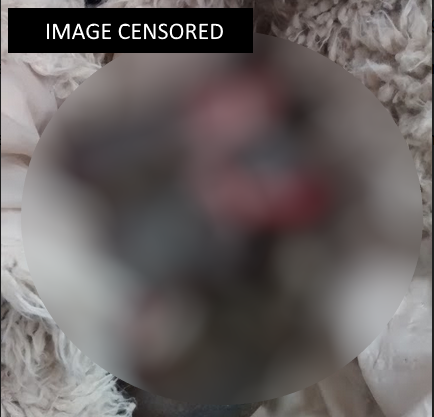 The member of the public who reported it to the charity said they found the pups inside a cat carrier with a black blanket and cream, furry Primark jacket. They believed the puppies were dead so covered them with a bin bag before calling the RSPCA.

Inspector Benson took them to a nearby vet: “Once we got to the vets I couldn’t believe my eyes – the puppies started breathing and were moving their little legs.

“We spent hours slowly trying to warm their little bodies up. I couldn’t believe they were still alive – the tips of their tails had frostbite and they were as cold as ice.

“Once they had warmed up they started to feed. They were trying to move, trying to suckle and were crying.”

“Despite the best efforts of veterinary staff who nursed the puppies and hand-fed them throughout the night, none of the babies survived,” inspector Benson added.

“The extent of their frostbite was too much for them and they were too young to fight it. They didn’t stand a chance.

“This case has been an emotional rollercoaster and I’m deeply saddened that someone could do this and that it wasn’t possible to save these innocent little pups.

“I’m now seriously concerned for the puppies’ mother and any potential littermates.

“I believe whoever dumped these pups knew they were alive when they left them. These puppies were barely two days old when they died and yet they’d already suffered such horrific cruelty and pain. It’s heartbreaking.”

Inspector Benson has launched an investigation and made enquiries in the local area. She is now appealing for anyone who can help the investigation

Anyone who has any information on where the puppies came from or who is responsible for abandoning them should contact the RSPCA’s appeal line on 0300 123 8018, leaving a message for Inspector Benson.