Reality TV seems to have taken over our TV sets, whether you live in the UK or USA it seems you can’t escape so you may aswell embrace and boy have we!

So much so we’ve decided to count down with 7 of the top dogs of reality TV.

1. Sui from The Crocodile Hunter

We saw her antics on the show, trained from a young age to be around wild animals, her cool and calm exterior made her a firm favourite with fans as we were able to see the love between a man and his best friend play out on screen until her final moments here after she was sadly diagnosed with cancer in 1998.

Scroll to 3 min 40 to see Sui and Steve as he talks about the word ‘mate’.

Take a look at Sui’s snapshots as Steve Irwin commented on how much she meant to him and the whole family here.

Owned by the show’s lothario Mario Falcone, Bentley has been at the centre of a custody battle and many arguments on the show between owner Mario and his ex Lucy Mecklenburgh. Shared custody and visitations were played out on the show with a friend stepping in to return Bentley to Mario after a short stay with Lucy.

Keep up with Bentley’s day to day activities on Twitter where you can see him living the high live, whether travelling in style or sitting behind Mario (shown here).

Often seen travelling the US with owners Robbie Welsh and Chris Hanna as they bid on loads to ship across the country, we think Gixxer has the best timing for facial expressions while wearing a bandana and can often be seen investigating the area upon arrival at the scene of the load collection or drop off. Whether he’s asked to or not, we think this shows that he’s a true professional who takes no risks – and like his owners is a ‘logistical specialist’. 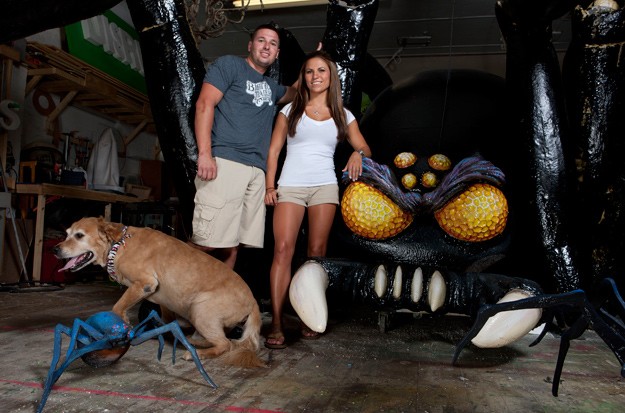 Catch Gixxer on Shipping Wars with owners Robbie and Chris on A&E (US) or the History Channel (UK).

4. Giggy from The Real Housewives of Beverly Hills

Owners Lisa and Ken Vanderpump lavish this little Pomeranian with the lifestyle, accessories and apparel any Beverly Hills dog could desire. Often seen accompanying his owners on screen on the RHOBH, Giggy is as deserving of his own website as any reality TV star.

Watch Giggy here as he prepares for fur and make up ahead of his appearance on The Ellen Show. Have you ever seen a more chilled out dog? No biggie for Giggy.

Tune in to Giggy’s own Twitter account to keep up to date with his latest celebrity fans and thoughts on life as a celebrity pooch.

5. Bijou and Marley from The Real Housewives of New York

What can we say, we do love our reality TV dogs and so do the ladies of the Real Housewives franchise, and our next entry appeared in K9 Magazine with their fabulous owner Sonja Morgan.

Millou took the cover with owner Sonja shortly after he passed aged 18 years old, leaving Marley as Sonja’s younger Poodle. Millou is worthy of a spot on this list, not just for his age and stature, but being nominated for a ‘Golden Collar’ for his role on the screen, sadly missing out to film star Uggie from the The Artist.

From her first appearance on Bethenny’s audition for the Real Housewives of New York to her starring role as a major part of Bethenny’s family on her owner’s solo reality TV show, Cookie is an older reality TV star – but with age comes attitude and spunk.

A dog who’s been by her owner’s side through the ups and downs, highs and lows, as her life has been played out through the media, she showed she’s a tough Cookie.

7. Pudsey from Britain’s Got Talent

Talented, cute and 100% his owner’s dog, Pudsey lept into our hearts and the pages of K9 Magazine and many a dog lover after winning Britain’s Got Talent with his owner Ashleigh. The shows panel of dog lovers, including Simon Cowell and Amanda Holden, fell in love with Pudsey from the moment he stepped on stage.

Combine an ex-mafia enforcer and dogs and what do you get? Well, we’ll tell you. In reality TV terms, you get ‘The Diamond Collar’.

James Guiliani paid for his crimes spending three years in prison but now the other of pet parlour ‘The Diamond Collar’, the show follows James as he runs the parlour and rescuing abandoned animals. Crediting his love of animals with turning his life around, his own dog Princess takes centre stage on the show.

Quite frankly, what more could we ask for on the show? Ex-mob, a pampered pooch called Princess, and a focus on helping abandoned pets finding safety.

Get Our BEST Dog Magazine Content
Enter your email and never miss out on receiving our best articles:
reality tv dogs